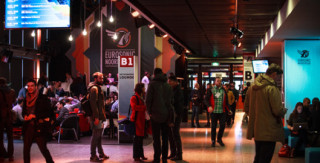 EPIC
The European Production Innovation Conference & Fair (EPIC) is a new conference stream that runs alongside the existing Eurosonic Noorderslag Conference, and is entirely focused on  innovation at festivals and venues. The event consists of three days of discussions, presentations of products, ideas and new ways to implement them at festivals, concerts, and venues, as well as in the production of events. SummerLabb, which is part of EPIC, is where research institutes, polytechnic universities and sustainability companies give visitors the opportunity to feel, taste and smell (technological) sustainable innovations. EPIC is the result of a partnership between Yourope, Double 2, VVEM, VNPF and Eurosonic Noorderslag.

EPIC takes place from January 15-17, 2015 in De Oosterpoort in Groningen. The price for a three day registration/passepartout for EPIC is 45 euros. A day ticket for EPIC costs 25 euros.

Tickets can be bought at the Eurosonic Noorderslag website.

Buma Music Meets Tech
After a successful first edition, Buma and Eurosonic Noorderslag will once again present the three-day segment Music Meets Tech, part of the Eurosonic Noorderslag Conference. The programme offers a wide range of lectures and round-table discussions about the latest developments in the areas of music and technology. It also gives companies the opportunity to present themselves and show what they bring to the table at the crossroads where music and innovation meet tech. New initiatives and start ups can apply to be part of Music Meets Tech, giving them the chance to present themselves in front of a professional jury from the tech and music industries. The winner will be awarded the Buma Music Meets Tech Award in the form of a € 5.000 cash prize.

Music & Media
Music & Media, the annual Eurosonic Noorderslag segment on Saturday afternoon, consists of a series of panels about music in the media. The programme concludes with the presentation of the Dutch Pop Media Award. This prize aims to encourage excellence in Dutch pop journalism and is awarded in recognition of the entire oeuvre of a pop journalist.