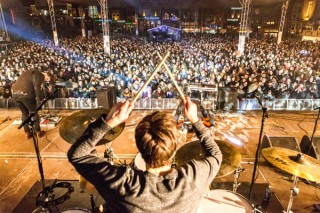 In the night of Saturday the 18th to Sunday the 19th of January 2014, a powerful edition of Eurosonic Noorderslag came to an end. The 28th version of the European Music Platform characterized itself by a great diversity and high quality of Dutch and European acts. This high quality shows that European music is developing and becomes more visible each year. From Wednesday the 15th to Saturday the 18th of January 337 acts presented itself to an audience of 3,275 music professionals, among others the top of the international music sector.

Festivals
337 acts from 29 countries performed at the showcase festivals of Eurosonic Noorderslag. This years line up distinguishes itself by its diversity and overall quality. By spreading the festival programme over Groningen, the city was full of European pop music. On Saturday the Dutch act The Opposites was awarded with the Pop Prize. Another highlight was the tribute to Dutch troubadour Boudewijn de Groot, featuring strong translations of his songs by The Kik, New Cool Collective Big Band, Janne Schra, Tangarine and Roos Rebergen.

Conference
The 150 panels, keynotes and workshops of the Eurosonic Noorderslag conference were a breeding ground of new insights for the 3,275 present music professionals. An increasing number of European venues followed the 419 attending international festivals by creating new co-operations.

Media
Eurosonic Noorderslag was covered by hundreds of journalists. Several broadcasters, such as Radio Serbia (RS), RTE (IE), WDR (DE), ORF (AT), NPO (NL), BNR (NL), produced radio and television content at the conference and festivals. The EBBA Awards, that were handed-out by the European Commission on Wednesday, will be broadcast in at least ten European countries in the next months.